What is Lubricant Grease?

Lubricating greases basically are composed of a thickener (10 to 15 percent), base oil (80 to 90 percent) and performance additives (5 to 10 percent). The total global market size of lubricating greases is about 2.38 billion pounds and consists of lithium/lithium complex, calcium, sodium, aluminum/aluminum complex, calcium sulfonate, clay based, polyurethane, etc. By far the most popular greases worldwide are lithium-based greases with a market share of more than 75 percent. While various kinds of greases may be required in a particular plant, there have always been efforts to rationalize and minimize the number of greases from a purchasing and logistics standpoint. This likely has led to the development of multi-purpose greases.

In simple terms, multi-purpose grease can be defined as grease combining two special greases or other properties that can be applied in multiple applications. For example, lithium grease can be applied both to the chassis and rolling wheels of vehicle applications. Traditionally, calcium greases have been used for the chassis and grease based on sodium has been used for wheel bearings. Calcium-based grease has been classified as high water resistance but low at high temperatures. On the other hand, sodium based greases better cover high temperatures but are not good in terms of water resistance. When lithium greases have emerged on the market, they were superior to calcium and sodium and greases quickly became the most popular multi-purpose grease in the industry. Nowadays, synthetic multi-purpose greases are highly regarded as high-end greases.

In the design and construction of modern machines, machines operate in more severe conditions, expecting more productivity and less dead time. This has made it difficult for lithium grease satisfies these requirements satisfactorily. The GC-LB specification of the National Lubricating Grease Institute (NLGI), which is the most popular in the transport sector, also requires grease-based 12-hydroxy lithium grease. 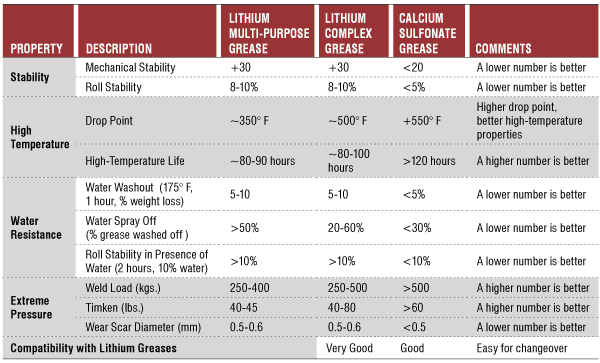 These rigorous requirements can be met by the most efficient performance grease such as lithium complex, calcium sulfonate, complex aluminum, polyurethane and base grease clay. However, due to their compatibility with the most used lithium grease, lithium and calcium sulfonate grease appear to be the best candidates for these grease multi-purpose high performance

However, a careful comparison of lithium and calcium sulphonate grease reveals that calcium sulfonate has an advantage. Calcium sulfonate grease eliminates grease complex lithium both on the data sheet and on real applications. The main difference between these two types of grease is that greasety calcium sulfonate generally does not need additives to meet certain performance requirements such as grease lithium complex. 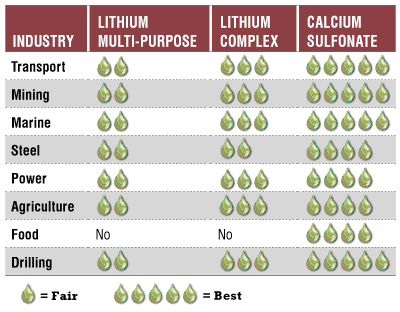 In addition, calcium sulfonate, with its thickening structure, offers excellent water resistance properties and does not decompose even in the presence of water. To improve their water resistance, complex lithium properties, grease usually requires tackyfiers, water can quickly exhaust. Calcium sulfonated grease is also compatible with complex lithium and lithium greases.

A calcium sulfonate grease can also be applied to many types of industries compared to lithium complex grease, which makes high performance multi-purpose grease the right choice.