What is Compression Packing? 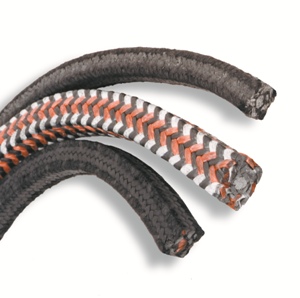 Packing is braided yarn made from a variety of materials such as graphite, aramid, and PTFE. Many braided packings will also incorporate blocking agents and other coatings to minimize leakage through them and provide cooling and lubrication during startup. The braided packing is cut into rings, inserted into a stuffing box and compressed using a bolted gland. Under axial compression, the packing expands radially, creating a seal between the stationary body of the equipment and the dynamic surface, usually a rotating shaft.The perception is often that this is an outdated technology suited to the steam-powered equipment of past centuries rather than one capable of meeting the needs of modern industry. But nothing could be further from the reality of contemporary packing products. Current technology utilized to design and manufacture high performance ensures that packing will be keeping up, not only with current but also with future needs and requirements.

Many factors need to be considered for a properly functioning sealing system, starting with packing construction, the fiber utilized for sealing, the reinforcements to prevent extrusion, and the blocking agents and lubricants to prevent permeation and to reduce friction. Then, it is necessary to establish the load sufficient to compress the packing against the stem to achieve sealing while maintaining friction as low as possible. 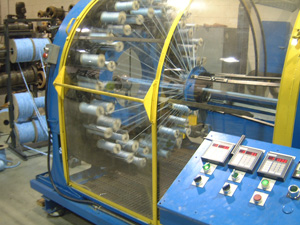 The fibers used to braid the packing have evolved from natural fibers, either vegetable or mineral, toward high-performance synthetic fibers. Some of the materials that are currently used to make the fibers are carbon, graphite and Polytetrafluoroethylene (PTFE). The fibrous material is then braided into a square shape. Typical constructions are square braid (Figure 1) or lattice braid (Figure 2). Each have their own characteristics in terms of formability and malleability.

But a compression packing is much more than braided fibers. Braided mechanical packing is a “system” made of fibers, braid style, lubricants for break-in or blocking, and corrosion inhibitors. General requirements for packing are resilience, chemical resistance, strength and temperature resistance. Compression packing is considered a cost effective sealing solution, particularly in applications with larger shaft diameters for which other sealing options are more costly. The standard packing designs and materials in use today can handle some pretty extreme conditions, i.e. pressures to 500 psi (34 bar), shaft speeds to more than 4,000 feet per minute (more than 20 meters per second) and temperatures to more than 600 degrees F (more than 315 degrees C).

In mining operations, there are applications in which ore slurry has to be moved from the mining site to the processing facilities. This is done with pumps in series that develop enough pressure to move this viscous abrasive fluid long distances. The particulates are abrasive and can wear packing fibers, pump shafts and sleeves and increase frictional heat. The elevated pressure creates high compression on the packing that can increase packing friction and wear, cause extrusion of the packing through clearances between the gland and shaft and make controlling leakage difficult. Leakage control can be complicated at these pressures because small adjustments of the gland bolts can cause drastic changes in leak rate and, subsequently, the frictional heat and operating temperature of the packing set.

A stuffing box is an assembly which is used to house a gland seal. It is used to prevent leakage of fluid, such as water or steam, between sliding or turning parts of machine elements.
Components 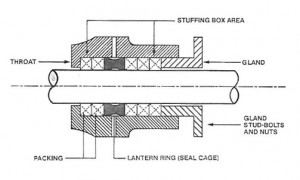 A stuffing box of a sailboat will have a stern tube that's slightly bigger than the prop shaft. It will also have packing nut threads or a gland nut. The packing is inside the gland nut and creates the seal. The shaft is wrapped by the packing and put in the gland nut. Through tightening it onto the stern tube, the packing is compressed, creating a seal against the shaft. Creating a proper plunger alignment is critical for correct flow and a long wear life. Stuffing box components are of stainless steel, brass or other application-specific materials. 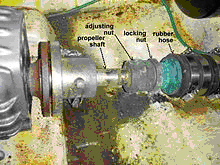 A gland is a general type of stuffing box, used to seal a rotating or reciprocating shaft against a fluid. The most common example is in the head of a tap (faucet) where the gland is usually packed with string which has been soaked in tallow or similar grease. The gland nut allows the packing material to be compressed to form a watertight seal and prevent water leaking up the shaft when the tap is turned on. The gland at the rotating shaft of a centrifugal pump may be packed in a similar way and graphite grease used to accommodate continuous operation. The linear seal around the piston rod of a double acting steam piston is also known as a gland, particularly in marine applications. Likewise the shaft of a handpump or wind pump is sealed with a gland where the shaft exits the borehole.
Other types of sealed connections without moving parts are also sometimes called glands; for example, a cable gland or fitting that connects a flexible electrical conduit to an enclosure, machine or bulkhead facilitates assembly and prevents liquid or gas ingress.

The market offers improved shaft packing materials that aim to be drip-less when the shaft is turning as well as when stationary. There are also pack-less sealing systems that employ engineered materials such as carbon composites and PTFE (e.g. Teflon®).

Test standards have been developed to validate compression packing emission performance. These require sophisticated equipment for the packing tests per API 622, and for valve emission testing per ISO 15848 and API 624.
One of the areas that has been lagging is the predictability of performance. There is an increasing demand from valve end users for low-emission sealing systems, but it remains important that the valve continue to move smoothly and efficiently. Since the frictional load of the stem packing has a contrary effect on these two requirements, valve and valve packing manufacturers are challenged with respect to the prediction and improvement of packing behavior in a valve.
Development of a Predictability Tool

This is the reason the European Sealing Association (ESA), in collaboration with the Fluid Sealing Association (FSA) and the Fluid Equipment Committee of French research house CETIM (a working group composed of French valve and sealing product manufacturers who initiated this program) are developing a tool to predict the initial packing tightening force required to reach certain characteristics in relation to friction and sealing performance. Part of the project is the development of a testing procedure that determines the packing ring characteristics needed for use in a calculation method for the torque required to achieve certain performance characteristics.

Mechanical tests will be carried out on individual rings, but the test rigs have been developed to be able to test full packing sets up to 6 rings. The application of a gland stress, applying stem movements, heating the stuffing box assembly to the test temperature and then repeatedly reducing the stress while applying stem movements and measuring the friction will generate data to establish a number of parameters, including the ring compression as a function of applied stress, the dynamic coefficient of friction and the axial force to radial force coefficient of transmission. Further testing will generate the ring modulus of elasticity, the relaxation coefficient of the packing ring, the deflection variation over time of the packing ring due to creep and the coefficient of thermal expansion of the packing ring.

The last part of the test determines the sealing performance of the packing. After application of stress on the packing and actuating the stem several times, the leakage is measured by helium mass spectrometry. Then the stress on the packing is reduced a number of times after which the leakage is measured at the lower stress level. This procedure is repeated several times to determine a reliable relational curve between packing stress and leakage.

The test setup consists of a hydraulic cylinder to actuate the stem, a stem movement transmission section with load or torque sensor, a hydraulic press to apply the gland load, and a test cell containing a stuffing box with up to 6 packing rings (Figure 3). 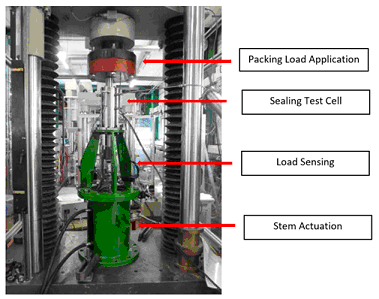 The test cell can be interchanged depending on whether leakage or mechanical behavior is to be measured. The stuffing box is dimensioned and to tolerance as defined in API622. The sealing test cell is able to measure the leakage rate of 1’’ stem diameter packing for internal helium pressures up to 8 MPa.

The mechanical test cell allows the testing of a variable number of packing rings. It is equipped with strain gauge chains each made of 10 strain gauges to measure the stuffing box external diameter deformation. This enables determination of the value of the axial-to-radial contact pressure transfer coefficient. The test cell is also equipped with a load sensor to measure the transferred axial load to the bottom of the packing, and the three displacement transducers positioned at 120-degree angles to measure the packing deflection.

Preliminary test results show the leakage is indeed dependent on the stress level applied to the packing, and that extremely low leakage levels can be achieved. Figure 5 details the relationship between stress level and leakage rates.

The ISO 15848 Valve Testing Standard sets three classes of leakage performance. Class C was originally intended for graphite packing, class B for PTFE packing and Class A for bellows valves. It can be seen that the highest level of performance, Class A, can be achieved with the right amount of axial compression with 4 graphite rings. Certainly axial loads of 60 and 80 MPa are high, and the valve construction must be such that it can handle these loads without deformation, but these results show how modern packing formulation and manufacture can achieve the most stringent requirements.

Testing of packing in a fixture such as that specified by API 622 is not a guarantee the same emission level will be achieved in a given valve. Factors such as surface finishes, concentricity, tolerances on diameters, bolt stress and deformation under load all affect emission results. After tests have been done to qualify the packing, further tests are then needed to qualify the valve with the packing. But information is now available to predict stress levels required for a given performance level. Cooperation between the valve and packing manufacturers is essential to achieve the best results.